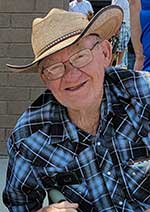 Earl was born on July 24, 1940, in Weatherford, Oklahoma to E.N. and Iva Mae Maynard. He was the youngest of eight children.

Earl spent his early years attending Weatherford schools. He and his family attended the Church of Christ in Weatherford. He worked hard on the family farm from a young age. This led to his lifelong hobby of showing and raising pigs. His other hobbies included hunting, catfishing, and roller skating. Earl joined the United States Army out of high school where he served his country honorably until his discharge in 1965. He met Janice Roberts at the roller skating rink and they married on June 15, 1962, in Corn, Oklahoma. In 1963 they moved to Arco, Idaho where Karri, Sonya, and Dean were born. The family attended the Baptist Church in Arco.

Earl held the position of Arco Chief of Police, managed the PU Ranch, and owned the Phillips 66 station in Arco. He then began to raise and sell 4-H pigs in numerous states.

Funeral Services will be held Friday, June 24, 2022, at 2:00 p.m. at the Baptist Church in Arco, Idaho. A gathering of friends and family will be held after the service at the church. Services are under the direction of the Anderson Family Funeral Home.