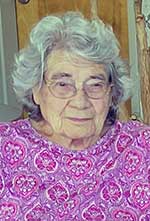 Dorothy Irene Schmuck, 100 years young, a resident of Discovery Rehab and Living, in Salmon, Idaho went home to our Lord on October 8, 2022. Dorothy Irene Dierks was born on July 13, 1922, to Carl F. and Helen (Wirsing) Dierks in Goodrich, Colorado. The Dierks family moved to Wyoming in 1933 and homesteaded west of Ocean Lake between Kinnear and Pavillion.

Dorothy married Marion L Schmuck, son of a neighboring homesteader, at Mt. Hope Lutheran Church at Kinnear on March 17, 1944. They lived with their three children in the Pavillion/Shoshoni area until June of 1967, when they moved with daughters Shirley and Judy to Mackay, Idaho where Marion had been hired to work on the Churndasher Ranch. Son Terry remained in Wyoming. Marion passed away on April 16, 2005.

After Marion’s passing, Dorothy moved into the Heritage Court Apartments in Mackay, where she lived until moving to the Diamond Peak Assisted Living Center in Challis in September 2017. Challis was her home until the facility closed in 2021, at which time she moved to the Discovery Care Center in Salmon.

Dorothy was an active member of Mt. Borah Cowbells, Mackay Women’s Club, South Custer County Historical Society, Ladies Aid, attended bible study on Barton Flat/Chilly, and played pinochle and progressive rummy with her friends and neighbors. She was very accomplished at embroidery and loved helping others learn the skills that lead to her beautiful work.

Funeral services will be held at the Mackay Community Church, at 11:00 a.m. Saturday, October 15, 2022. A Viewing will take place 1 hour prior to the service. Interment will be in the Mt. McCaleb Cemetery under the direction of Anderson Family Funeral Home.

Memorials may be made to Discovery Rehab and Living, 600 Shanafelt Street, Salmon, Idaho 83467 or Mackay Community Church, Mackay, Idaho 83251.