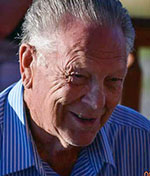 Donald Thomas McKelvey was born April 15, 1932 in Chilly, Idaho to John and Ardella Larter McKelvey; he was the youngest of their five children. He passed October 29, 2019 at his home in Mackay, Idaho surrounded by his loving family.

Don attended elementary at the Chilly school until his 8th grade year. He graduated from Mackay High School in 1949.

As a young boy, Don loved animals. Growing up in Chilly on the family cattle ranch gave him the opportunity to care for many different pets. He always had a dog by his side but also cared for antelope, deer, and even an elk and a bear cub. As he got older, he enjoyed sitting in his breakfast nook, drinking coffee with his family and watching the deer wonder about his yard.

In 1950, Don asked Charlotte Manson to dance at Cottonwood Grove. They danced one dance every Saturday night, all summer long. Don and Charlotte celebrated their 65th wedding anniversary on May 21, 2019.

In 1952, at 20 years old, Don suffered a near fatal accident. While building fence with his brother on the family ranch at Bartlett point, his leg was caught in a post hole auger. Don spent 2 1⁄2 months in the Sacred Heart hospital and a month and a half at home flat on his back. It was during this time that he and Charlotte became “serious.”

They eloped to Elko, Nevada on Charlotte’s 18th birthday in 1954. Soon after, they had their oldest daughter Karen, and then Kandy, Jim and Jack. Don was a dedicated husband and father first and foremost. Their children stayed close to home and family get togethers were a highlight of his life. He was especially proud of all his kids and grandkids graduating from Mackay High School and felt his greatest accomplishment in life was his family.

Don spent years in the Mackay highschool gym and walked miles on the football field sideline watching his kids and grandkids play as Mackay Miners. There wasn’t a game he missed although there were some he had to watch from afar after being kicked out by the refs.

In 1963, Don and Charlotte sold the ranch and bought their family home in Mackay. Throughout the years, Don worked many different jobs. He was an equipment operator at the copper mine on the Minehill, ranched for the Karl Smith Ranch, built roads for the Forest Service, rode for the Alder Creek Cattle Association and owned and operated Perks Bar with Charlotte and their friends, Herb and Sharon Whitworth. In 1972, Don and Charlotte returned to Chilly where he was the cattle foreman for 19 years for San Felipe Ranch. Many lasting friendships were formed during this time. Throughout his life he was involved in service to the community he loved. He was an active member of the Lions Club, Chamber of Commerce and helped coach little league baseball, developing a baseball field at the existing Centennial Park. Don also served on the Mackay School Board. While on the board, he was instrumental in the addition of the Mackay High School library and auditorium.

In 1992, Don and Charlotte moved back to their family home in Mackay where Don worked several years for the Lost River Highway District. In his retirement, Don enjoyed spending time with his family, taking care of his yard, daily trips to the grocery store and post office, and evening drives with Charlotte. Throughout his life, there were few times he traveled very far from Mackay. He was most content at home with his family.

Don is survived by his loving wife of 65 years, Charlotte Manson McKelvey; daughters Karen Hames and Mary “Kandy” (Jim) Krosch, sons, James (Donna) McKelvey and Jack (Marty) McKelvey. He was blessed with 18 grandchildren, 36 great grandchildren, two great-great grandchildren and several nieces and nephews. He was especially close to his niece, Linda Polson and nephew, Wally Whitney. He was preceded in death by his parents, a sister, Marjorie Reno, a sister, Helen Whitney, a brother, John F. McKelvey, a sister, Patricia Watson and an infant brother, Henry McKelvey.

A humble man, Don will be remembered for his quick wit, his infectious laugh, and his kind and compassionate spirit. His wife and children would like to invite family and friends to his funeral services at the Mackay High School auditorium on Saturday, November 2 at 11:00 a.m. Don will be laid to rest at the Mount McCaleb Cemetery. In lieu of flowers, please honor Don’s legacy with a donation to the Mackay EMTs.