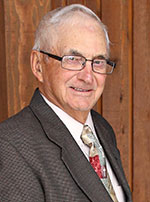 An unwavering faith in Christ, a dependency on God’s Word, and a love for family is the simplest way to describe Dad. Throughout his life, Dad had a quiet and gentle spirit while maintaining a sweet and simple demeanor that won the trust and hearts of many as a witness of his love for Jesus.

Donald Merle Isham was born on December 6, 1934 in Arco, Idaho to John Arch and Katie Isham. He was welcomed home by his older brother Wayne Isham. Dad grew up on a farm at North Creek in Howe, Idaho. He attended school in Cedarville, Howe, Clyde, and Salmon and finally graduated from high school in Arco, Idaho. Living approximately 20 miles north of Howe and having limited transportation, Dad was boarded out with several families at an early age while going to school. Gathering the coal, starting the fire, and filling the porcelain pot with water were a few of the many tasks required of Dad in return for his room and board. After high school, Dad attended University of Idaho in hopes of obtaining a degree in Agriculture. Running short on funds, Dad returned to Howe and became the custodian and bus driver for the Arco schools, but never lost his love for learning or the aspiration to send all of his grandkids to college.

While Dad was driving bus, he fell in love with one of his passengers, Karen Leila Ralls. Dad proposed to Karen on December 25, 1957. Having to put their engagement on hold, Dad was drafted into the United States Army in February of 1958. He served in the Korean War as an Army chef. Once Dad returned, he and Karen were married March 12, 1960 in Howe, Idaho at the Howe Community Church.

Dad’s dreams finally came true when he was able to purchase his own farm known as the “Home place.” Two years later, another son Jeffery Ray, was born in 1966. Not only was Dad growing his crops, but also his household as another son, Darren Lee was born in 1970 and a daughter Shelle Dawn in 1974.

Buying land and playing in the dirt was a joy in Dad’s life and in 1986, he purchased Syd Werry’s Ranch. In 1987, Dad established Isham Farms Incorporated, where he farmed with his three sons. Years later, Isham Farms acquired the Leo Amy Ranch. Dad worked tireless hours along with his sons in the fields and drove countless miles on the road trucking. In 2008, Dad retired from the heavy labors of the farm and they moved to Ammon.

Dad was involved in several organizations. He was the treasurer in the Howe Lion’s Club and a member of the Lost River Hospital Board for 29 years. A major accomplishment for Dad’s farming career was being elected into the Agricultural Hall of Fame.

Reading his Bible daily, praying for others, enjoying a good book, playing cards with friends, chasing grandkids in their sports, cooking with mom, traveling with kids, drinking coffee and sharing a conversation, and attending Bible studies with the men at church brought Dad great joy.

Dad was always about “Others” and serving the Lord was a priority to Dad. He spent several years teaching adult Sunday School at the Little Lost River Bible Church. Dad always enjoyed feeding people and became the head cook for Old Faithful Christian Ranch (OFCR) for nearly 20 years where he poured his love into so many young people. Volunteering at the City of Refuge brought so much joy to Dad as he loved on the people of the Idaho Falls community.

Dad’s life verse is Jeremiah 33:2-3 “Thus saith the Lord the maker thereof, the Lord that formed it, to establish it; the Lord is his name; Call unto me, and I will answer thee, and show thee great and mighty things, which thou knowest not.” Dad knew who his maker was and called upon the Lord to be his Savior, on the front steps of his farmhouse, on the evening of May 27, 1967. What is Dad’s desire for you to know today? He would want you to know his Lord and Savior, Jesus!

Dad knew Jesus as his first love and his fervent prayer was that his children, grandchildren, great-grandchildren, extended family and friends would accept the free gift of salvation from Jesus.

3 John 4 “I have no greater joy than to hear that my children walk in truth.”

Dad is survived by the love of his life Karen, a son Mike, a daughter-in-law Kelly, a son Darren (Stephanie), a daughter Shelle (Shane), 19 grandchildren, and 18 great-grandchildren. He is preceded in death by his parents, his brother Wayne, his beloved son Jeff, and his beloved daughter-in-law Kirsten. In lieu of flowers, donations can be made to OFCR at www.ofcr.org or mailed to 145 6th Street Idaho Falls, ID 83401.

Funeral services will be held Wednesday, July 14, 2021 at 11:00 a.m. at Watersprings Church, 4250 S. 25th E., Idaho Falls, ID 83404. The family will receive friends for one hour prior to services. Interment will be held afterward at the Howe Cemetery in Howe, Idaho under the direction of the Anderson Family Funeral Home of Arco.