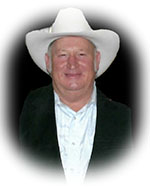 He was born on May 5, 1945, in Pinedale, Wyoming to Heber and Bertha Matlock Lord. Donald spent his early years in Pinedale, WY, Jerome, Rupert, and Howe, Idaho before eventually moving to Mackay, Idaho in 1973.

On December 31, 1974, he married Judy Larsen in Darlington, Idaho. They made their home on the ranch in Leslie where Don worked hard to provide for his family. He not only worked the ranch but also owned and operated D & R Trucking Company and was a licensed electrician.

Don was a member of the Jaycees in Burley, ID, the Lion’s Club in Mackay, ID and the Cattleman’s Association. He enjoyed ranching, hunting, fishing, camping, working his cattle, trips to Jackpot, NV, spending time working with his family, and flying his airplane. He was a Christian that was deeply devoted to his family.

Surviving is his wife, Judy Lord; his sons, David Lord, and Michael Lord, all of Mackay, ID; a daughter, Connie Lord-Neighbor, Boise, ID; 3 grandchildren, 7 great-grandchildren; 3 brothers, and 3 sisters. He was preceded in death by his parents, 2 brothers, 5 sisters, and his youngest son, Douglas Lord.