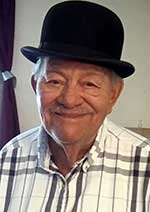 He was born to Florence Fern Goe Burns and Joseph Robert (Bob) Burns in Rigby, Idaho on October 14, 1941. Dean later served in the United States Navy and soon married Sharon Burns. They had a son Benjamin who preceded him in death. Dean and Sharon were later divorced.

Dean worked at Blackfoot Motors for many years where he won top salesman of the year award often. He loved family, old cars, good home cooking and taking road trips to see the sights. It was said that he knew every back road in Idaho. His favorite place on earth was driving over Monida Pass and reminiscing of days past with the old steam engine roaring out of the mountains to the beautiful prairie below.

In 1979 he married Shirley Lavon Schafer they later retired and moved to Arco, Idaho.

Dean is survived by his sister, Jeanene Schroeder and many nieces and nephews. He is preceded in death by his wife Lavon, his mother and father, a son Ben, his father, Lloyd (Pluggy) Elmo Robbins, his sisters, Jane Scott, Eloyse Rogers, Justine Staley, Sandy Prestwich, Kita Teeter, Barbara Sharpe, Shaunna Birkinbine, and his brothers, Bob, David and Byron.

A Celebration of Life service will be held and announced at a later date. Cremation services are under the care of the Anderson Family Funeral Home in Arco.