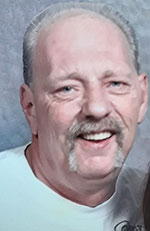 Our beloved husband, father, brother, Papa, and friend Daniel Frank Bates passed away from this Earth July 29, 2019 due to complications from cancer.

He was born December 31,1953 to Don Arlin and Ilene(Woodbridge) Bates in Arco, Idaho. Dan spent his childhood and early years in the Lost River Valley. He loved fishing, hunting, camping and dirt road drives. He was also a lifelong fan of the Dallas Cowboys and seldom missed a game. He spent his last years in Idaho Falls.