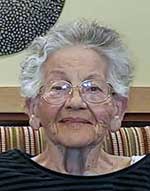 She was the last child born to Harold and Reeta Andersen. Clysta was raised in the Lost River area and went to schools in Arco, Idaho. She was a member of the Church of Jesus Christ of Latter-Day Saints.

Clysta married F. Neil Reed on April 3, 1953. They were blessed with five children; Rick, Jewell, Merl, Larry, and Luanne. They lived in several places while Neil was an Ironworker. They lived on the ranch in Clyde, Idaho until they moved to Challis when Neil went back to drilling wells. Neil and Clysta were later divorced.

She moved to Washington State where she furthered her education. She eventually came back to Idaho where she worked for the State of Idaho until her retirement. She loved and cherished her family beyond measure. She was very generous and loved being with her family and friends. She was an avid reader, enjoyed gardening and sewing.

Clysta lived her last years in Arco with the exception of her time in assisted living. She was loved by so many and will be missed.