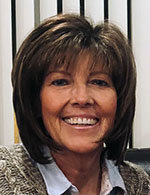 Cindy Lee Smyer, 58, of Mackay, Idaho passed away at her home surrounded by family on Saturday, January 2nd, 2021 after fighting a long and courageous battle with cancer.

Cindy was born June 9, 1962 in Tremonton, Utah to Norman T. Burnett and Mary Ellen (Mangum) Graham. She grew up in Hyrum, Utah and also moved to Arkansas, Kansas, and Arizona due to her father’s TDY work before moving back to Hyrum, Utah. She married Russell Clay Hatch on July 31, 1981 in the Logan LDS Temple. They had 2 daughters together, Crystal & Tiffany, and then they were later divorced. She then married the love of her life Ricky Louis Smyer on June 13, 1987 and they were later sealed in the Logan LDS Temple on January 28, 1989. They had 2 children together, Amanda & Scott. Cindy & Rick lived in Albion, Idaho before moving to Mackay, Idaho in 1996.

While living in Albion, Idaho she worked tirelessly at the Get-N-Go Deli where she managed and operated it for her mother-in-law. She learned to make amazing cinnamon rolls that were always a requested item by her family. After moving to Mackay, Idaho she served in the community while her kids were growing up. Her most recent employment included working as the secretary for Water District #34 for the last 18 years. During most of that time she also managed the Dental Office in Mackay for several different dentists over a period of 15 years. She held many church callings over the years and loved serving people. She loved to craft and did many saturday projects with the church. Those who knew her, knew that she insisted on serving others to the very end of her life. Even when she didn’t feel well, she was always thinking of what others may need. She also loved spoiling her grandchildren and would do anything for them.

She is survived by her spouse Ricky Louis Smyer of Mackay, Idaho; her children Crystal (Travis) Roche of Mackay, Idaho; Tiffany (Jon) Paul of Caldwell, Idaho; Amanda (Bobby) Callahan of Boise, Idaho; Scott (Briana) Smyer of Idaho Falls, Idaho; and her 9 grandchildren with one on the way in April; Her father Norman (Sheila) Burnett of St. George, Utah; her brother, Jeff (Niesha) Burnett of Hyrum, Utah; and her sisters Dana (Bryan) Hardman of Pleasant Grove, Utah and Susan Hill Porter of Kaysville, Utah.

She is preceded in death by her mother Mary Ellen (Mangum) Graham and Lee Graham; her brother Eric Burnett.

A viewing will be held from 6 to 8pm, Thursday January 7, 2021 at the Anderson Family Funeral Home in Arco, Idaho.

Funeral Services will be held at 11am, Friday, January 8, 2021 at the LDS Church in Mackay, Idaho with a viewing one-hour prior to the funeral from 10-11am. Interment will be in the Leslie Cemetery following the funeral services.

The family would like to thank Dr. Dane Dixon and his staff at the Teton Cancer Institute along with Cindy Clark at Salmon Valley Hospice for their loving care.