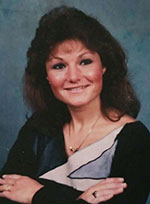 Chris was born on March 19, 1960 in Pocatello, Idaho to her parents, Karon and Charlie Huggins who were both students at Idaho State University.  She lived in Arco, Idaho from 1961 until she graduated in 1977 from Butte High School.  Chris enrolled and financed herself through college at the University of Idaho where she graduated with a duel Masters Degree in Business Administration and Management, completing in 1986.  Chris took multiple positions with companies, working her way towards her chosen profession as a Pharmaceutical Representative in the state of Washington, where she excelled as the top pharmaceutical representative several times.

The pride and love of her life was her son, Brandon Michael Huggins who was born in 1987.  The loves of her life were all of her immediate family and numerous close friends.  Chris was an animal lover who loved her horses, dogs and cats throughout her life.  Chris' high school years were very active.  She stayed very busy by helping greatly on the family farm, accepting student counsel positions; cheer-leading and was a member of Job's Daughter's, achieving the "Honored Queen" status, while working at Marlin Felton's Lost River Drug Store throughout high school.  Chris passed on 11/11/2011 in Federal Way, WA.  Her ashes have been held by her Mother and Father until now, where she will be buried beside her mentor and hero, Charles D. Huggins who passed away on August 24, 2019.   Both will be buried in the Arco cemetery, next to each other, at a later date.  Services will be held on September 1,  in the Butte High School auditorium at 4:00 pm, directly after her father's services.