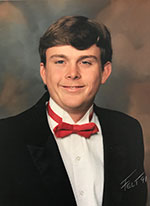 Chet Blair Stewart, 46, passed away Thursday September 12, 2019 at his parents home in Shelley, Idaho from an extended illness.

He was born July 5, 1973 in Arco, Idaho to Bruce Nyle and Gwen Anderson Stewart. Chet was raised in Arco. He attended school in Gooding at the Idaho State School for the Deaf and Blind where he graduated.

Chet worked for Hewlett Packard in Boise for a short time and also built light bars for police cars for a brief time. Then he moved to Idaho Falls where he began working for Basic American Foods. He worked there for over twenty years. Due to health complications he had to retire.

Chet was a member of the Church of Jesus Christ of Latter Day Saints. He enjoyed camping, fishing, riding bikes, go-carts and snowmobiling. He loved spending time with his family. In 1991 he earned his Eagle Scout Award which he was very proud of.

Funeral Services will be held Tuesday September 17, 2019 at 11:00 a.m. at the Jameston Ward Building, 1101 E. 1250 N, Shelley, ID. The family will receive friends prior to the service at the church from 9:30 to 10:45 a.m. Interment will be in the Lost River Cemetery at 3:00 p.m. Services are being cared for under the direction of the Anderson Family Funeral Home.