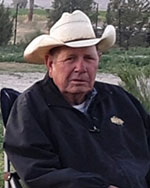 Charles Guy Johnson, 83, passed away at his home in Howe, Idaho, July 23, 2020. Charles was born to Granville and Monte Wilkerson Johnson on June 5, 1937 in Dublin, Texas. He is survived by his two daughters, Ada Suzanne Johnson and Sharon Smith.

Dad was raised and went to school in and around Dublin, then went on to a long career with the phone company in El Paso, TX. He retired in his early 50s and moved to Caballo in southern NM, where he quickly established himself so well that everyone thought he was from there. In his late 60s, he began spending many of his summers in southeast Idaho.

Dad made friends wherever he traveled and he traveled many places. He will be missed from central Texas to southern Montana. As you ask yourself 'what can I do?', please do this. Turn on some western swing country music, open up a can of Coors beer, sit on the porch, watch the day go down, and be thankful. If you can, get in your truck and cruise the mountains. Imagine him there beside you. That's what he would want. Know that Dad thought highly of you all and he loved you as much as you loved him.

There will be no services as Dad wanted his body donated to cancer research in Texas due to his lengthy time in an experimental program at M.D. Anderson. It would be appreciated if any gifts or donations for Dad could be made in his name to Cowboys for Cancer Research (C4CR) out of Las Cruces, NM, his all-time favorite charity.