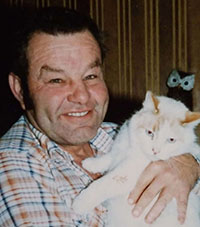 Charles D. Huggins was born on August 28, 1937 in Rupert, Idaho and passed away on August 24, 2019.  He attended Snake River High School where he was elected Student Body President his senior year.  He married Karon Naomi Ivie in 1959 and they moved to Arco, Idaho where they just celebrated 60 years of marriage.  Karon and Charlie had four Children:  Chris, Jack, Matea and Ed. Charlie was the son of Si and Helen Trevino Huggins; and after his father's death, he was a stepson to Bolen Uresti.  He attended Idaho State University for his undergraduate Social Science and Education degree, where he was a golden glove boxer and a member of Intercollegiate Knights.  He moved to Arco, ID in 1961 to begin a teaching profession at Butte High School.  From 1966-1970, he attended summer school at Washington State University (with his wife and four young children) where he earned a Masters of Arts in Communication.  He split his professional career between being a high school teacher and principal over a 33 year career at Butte High School and was very active in every ongoing high school activity.

The pride and joy of his life was his wife (Karon), his father and mentor (Si),  his four children and his 10 grandchildren.  He loved hunting, fishing, ranching, his many friends, his dogs and cats, his community, his career and his "life" in general.  His ashes will be buried with his daughter Chris' ashes at the Arco Cemetery at a later date.

Funeral services will be held Sunday, September 1, 2019 at the Butte High School Auditorium at 4:00 pm with a viewing to be held one hour prior to services.Funeral services are being cared for by the Anderson Family Funeral Home of Arco.