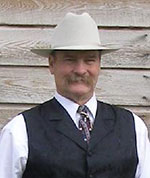 Casey Lee Amy was a man larger than life with a heart that was just as big. Born on October 11, 1960 to Robert and Judy Amy in Arco, Idaho; he was the eldest of the three siblings. His childhood was spent riding through the Little Lost Valley on the back of his pony Dictator, exploring, hunting, fishing, ranching and developing into the cowboy he would forever stay.

Starting his education in the Clyde one-room schoolhouse, he moved to Butte County high school and into wrestling and football. After graduation, Casey attended University of Idaho. He became a member of Farmhouse fraternity, the President of the U of I Rodeo team and met the love of his life, Rhonda Lynn Amy.

After college, Casey and Rhonda married and moved to Harrison, Idaho to manage the L-7 south devon cattle ranch. They had their two children and ranching priorities shifted to accommodate 4-H projects, sporting events, coaching, and anything their children pursued. Casey’s devotion to fatherhood was unmatched.

He continued to be involved in the community as neighbors became friends, and friends became family. He spent all his days supporting and uplifting those around him. From attending Saints football games, to organizing auctions and charity events, and becoming a staple in countless lives, Casey has become so much to so many. To know him was to love him.

Services for Casey Amy are planned for Saturday, September 11, 2021. There will be a viewing from 11 am to 1 pm with funeral services to follow at the Arco High School auditorium at 120 N. Water Street, Arco, Idaho. All are invited to attend. The graveside service and fellowship will follow the funeral at the Little Lost River Community Center in Howe, Idaho.

Services are being cared for by the Anderson Family Funeral Home of Arco. If you are unable to attend, there will be a Celebration of Life at the Benewah County Fair Grounds in St. Maries, Idaho on September 17 th at 5:30pm.