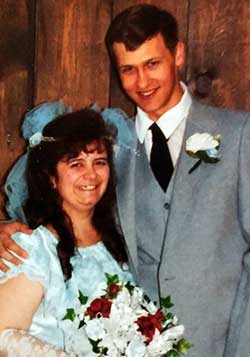 Bryan Thomas Carstensen, of Challis, passed away peacefully, on February 11th, 2022, with his loving family by his side. Bryan was born in Billings, Montana in 1968, to his loving parents Christian and Marye Ann Carstensen. When Bryan was 2 years old they moved to West Yellowstone, Montana. Then the family moved to Livingston, Montana, where Bryan and his brothers and sister were raised as Jehovah's Witnesses. Bryan dedicated his Life To Jehovah on July 6, 1986. He stayed faithful to his God till his death.

He graduated from Park High in 1987. Bryan did full-time ministry for the next 1 and a half years. He moved to Twin Falls, Idaho in 1989. Bryan did odd jobs to support his ministry. He moved back to Livingston, MT. in 1990. Bryan then married Rebekah Jones, on May 11, 1991, and they were happily married for the next 31 years. Together they raised their son Timothy. Bryan moved his wife and son to Challis, Idaho in 1993, where as a family they served faithful as Jehovah's Witnesses for the next 29 years. Bryan loved reading and studying the Bible. He loved sharing his hope for the future and he will be remembered for his deep love for his wife, son, parents, brothers, and sisters, Love for his God, Jehovah, and the Bible.

He is survived by his wife Rebekah, son Timothy, father and mother Chris & Marye Ann; his sister, Sherry; brothers, Barry (Dusty), Mark (Rebecca), Charley (Caroline); and many nieces and nephews and a large family.

He was preceded in death by father-in-law James; grandmother, Emma, brother Timothy.

Funeral arrangements are being cared for by the Anderson Family Funeral Home of Arco.