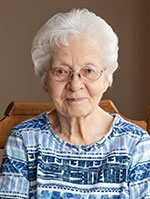 Beverly McLerran Farmer passed away on Monday, 1 March 2021 in Shelley Idaho at the home of her daughter. She was born at home in Arco Idaho 26 October 1927 the fourth child of Stantford Adrian McLerran and Ruth LaRue Winger.

She lived in Arco most of her life. The last several years she has spent time at her daughter’s homes in Shelley Idaho, Pocatello Idaho and Longmont Colorado.

She was preceded in death by her parents; a brother (Adrian Carlyle) and a sister (Ruth Lorraine), both who passed before she was born. Also, two brothers, (Douglas Wayne and Sheridan Fay) who she knew through their adulthood. Her husband (Darrell) passed away suddenly on her 50th birthday in 1977.

Beverly enjoyed growing up in Arco with friends and family. During High School, she began dating a redhaired, freckle faced boy, Darrell Farmer. Darrell enlisted in the Navy at the tail end of World War II (1946). They corresponded while he was overseas. When he came home in May 1948, she knew that he was special. He proposed that summer and they were married in September at her parents’ home in Meridian Idaho. They were later sealed in the Idaho Falls Temple in 1964.

They lived in Logan Utah where Darrell graduated from Utah State University in 1953. They returned to Arco where he leased a photography studio and later went to work doing photography at the Atomic Energy Commission site. Beverly helped him as he continued to do photography for weddings and families on the side.

She began working part time at the Craters of the Moon National Monument about 10 years before Darrell’s death and continued until her retirement in 1992. She enjoyed the association with her fellow workers at the Craters.

Beverly was an active member of the Church of Jesus Christ of Latter-Day Saints serving in various capacities. She especially enjoyed serving for many years in the Young Women’s organization. In her later years she could be found serving diligently in the library on Sundays.

Beverly showed passion in whatever she did, always with “energy”. In fact, the grandchildren nicknamed her the “Energizer Bunny” because she always kept going, and going, and going….

Funeral services will be held Saturday March 6th at the Arco Ward LDS Chapel at 12:00 noon. A viewing will be held before the service from 10:00 -11:30 AM. Interment will be in the Hillcrest Cemetery in Arco, under the direction of the Anderson Family Funeral Home.