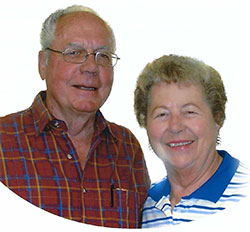 Betty Schild Higbee, 92, of Mackay, Idaho passed away suddenly and peacefully on June 30, 2020, active to the end as her beloved Otto was helping her into the car. Betty was born to Henry and Ruth Jeffries Schild in Twin Falls, Idaho on April 26, 1928. She was the oldest of 6 children and was the consummate big sister. She and her siblings were born into the difficult depression years followed by war years which gave them grit and determination to succeed and find joy in the simple things of life.

The family farmed in McCammon, Fort Hall, Chubbuck and Tyhee. Betty spent summers hoeing sugar beets and potatoes and helping her brothers and sisters. She graduated from Pocatello High in 1946 while also working at Miller Bakery and Henricksen’s Appliance. She met Mike Luker at the wedding of friends where he was the best man and she the bride’s maid. They were married April 15, 1947 at Wheeler Field, Hawaii where Mike was stationed.

After moving to Idaho Falls, son Lynn was born. Betty worked at Idaho Falls Livestock Auction and Arrington Construction. The family moved to Cocoa, Florida in 1960 where Betty worked for Provost Office Equipment while Mike worked for NASA. In 1962 they moved to Lompoc, California and Betty worked at Vandenberg AFB as a supervisory employment specialist. While in California, Betty started making ceramic art, pouring, painting, and firing many varied and beautiful pieces. Her attention to detail was amazing.

After returning to Pocatello in 1972, Betty started work with the Internal Revenue where she became an auditor, retiring in 1988. In the meantime, after a divorce, Betty met Otto Higbee. They were married on December 13, 1975. Betty gained two more children, Pamela Jean Bilyeu and Otto Doneal Higbee and several grandchildren. Betty and Otto enjoyed 44 wonderful years together. In addition to her work at the IRS, Betty helped Otto manage and maintain a number of apartments, and helped him at his auto repair shop Otto-Tune in Pocatello.

In their spare time Betty and Ott would go to Mackay on weekends and vacations. In 1994 Ott closed the shop and they moved full time to Mackay. Mackay was the perfect place for gatherings with children and grandchildren, which always included Betty’s legendary cooking. Mackay became a second home for all. Betty and Ott jumped feet first into the community, helping with the Mackay Rodeo, Mackay BBQ, Senior Center, the Mayor’s office, and so much more. There are so many dear friends in Mackay who became the fabric of life for Betty. She was a tireless worker, impeccably honest, practical, inspirational, a devoted friend, mom and grandma.

Betty was preceded in passing by her parents, her brothers Bob and Jack Schild, and Sister Mary Louise Schild. She is survived by husband Otto Higbee of Mackay; two sisters, Shirley Davis of Pocatello, and BJ Christiansen of Clayton, NC; Betty’s son Lynn (Helen) Luker of Boise, their 8 children and 29 grandchildren, and children Pam (Chip) Bilyeu of Pocatello, 5 children and 6 grandchildren, and Doneal Higbee of Pocatello, and 3 children. Betty will be deeply missed by too many to count. She will certainly be checking up on her little brothers to make sure they are staying out of trouble.

Funeral services were held Friday, July 3, 2020 at 4:00pm in the Mt. McCaleb Cemetery. Services were cared for by the Anderson Family Funeral Home.