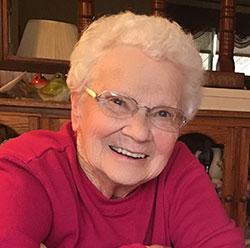 Betty Darlene Johnson Allen, 87, of Howe, passed away peacefully at home in Howe on January 21, 2019.

She was the third daughter born to Oscar and Hazel Johnson on October 17, 1931 at their home in Arco, ID.

Betty was raised in Arco and attended all 12 grades there. After graduating in 1949, she worked at the INL Site then attended Ricks Collage nursing school. Betty married Norman Allen in Elko, Nevada in 1953. They made their home in Twin Falls for four years before making their permanent home in Howe. Betty worked at home on the farm and raised four children. She worked again at the INL Site and later as the office assistant at the Howe school for nine years before retiring in 1993.

Betty supported many students and grandchildren in 4H, and enjoyed attending as many sporting events as possible and was active in the PTA.  Betty and Norm would have celebrated their 66th wedding anniversary in February. Together, they loved square dancing and enjoyed their pinochle parties. Betty was a member of the LDS Church.

She is survived by her husband, Norman Allen: sister Cleo (Leo) Amy, and her children, Scott (Darla) of Howe, Brent (Karla) of Howe, Glenda (Kent) of Coeur d’Alene and Todd (Joel) of Birch Bay, WA: and 13 grandchildren, 43 great-grandchildren.

She was preceded in death by parents Oscar and Hazel (Farnsworth) Johnson, and sister Claris (Harrell)