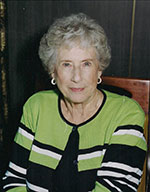 She graduated from Butte County High School and lived in the Lost River Valley for most of her life. She was a rancher’s wife living in Darlington until 1973, retiring to Arco until 2013. She served as the Lost River Hospital Auxiliary President and volunteered for many years with the organization. She was an active member of the Church of Jesus Christ of Latter Day Saints. She moved to Chandler, AZ for three years and then to Salt Lake City another three. She spent many happy years traveling and being around family, making friends wherever she went.

She loved watching NBA games, boxing, and cooking shows on TV, loved music, cats, and flowers, always wanting to go for drives in the car to see the country. She traveled with many family and friends over the years to Mexico to deep sea fish, several National Cattlemen’s Assoc. conventions across the US, driving to Detroit to buy a few new cars, a World’s Fair, an Alaska cruise, a trip through the Panama Canal, Washington DC in the springtime to see her brother and the apple blossoms, Hawaii - twice, Mardi Gras in New Orleans, camping, lots of family reunions, and picnics. So many fun stories of adventures and traveling.

There will be a graveside service on Saturday, September 07, 2019 at 3:00 pm at the Hillcrest Cemetery in Arco. Family and friends are invited to join a dinner in remembrance of her life following the graveside service at the home of Darlene Jensen in Lost River.Funeral services are being cared for by the Anderson Family Funeral Home of Arco.