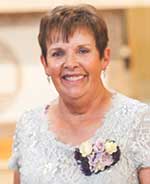 Bobbi, as she was known by her family and friends, was born on October 24, 1941, in Idaho Falls, Idaho to Dale Edward and Dorthy G. Keller Schureman. She was raised and received her education in Arco, Idaho. On August 14, 1976, she married Lone James Huelsman Jr. and later, they blessed their marriage at the Holy Spirit Catholic Community Church in Pocatello, Idaho. They made their home in Moore and McCammon, Idaho, and Yuma, Arizona.

Bobbi worked as a secretary at NRF at the INL, the Lost Rivers Hospital and Credit Union in Arco. She also was the bookkeeper for St. Ann's Catholic Church in Arco and a working partner in Huelsman Farms. She enjoyed quilting, sewing, golfing, and bowling. She was a member of the Catholic Church.

Test Test
this is service