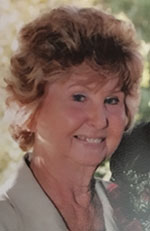 Arva Jean (Jeanie) Hodge passed away peacefully at her home on December 18, 2019 in Pocatello, Idaho from cancer, surrounded by her two sons at the age of 82. She was born on March 21, 1937 in Aberdeen, Idaho to George Warner and Orveata (Corbridge) Warner. She was the fourth of four children. Around the age of six her family moved to Mackay where she enjoyed living on a ranch and helping her mother with a garden in town.

Jeanie graduated from Mackay High School and a short time later married John Taylor Brower in July of 1954. Together they raised four children in Mackay until moving to Pocatello in 1965 where the fifth child was born. Later on they were divorced. She worked several jobs, met and married Bob Wright in 1970. They ran a business in Pocatello until Bob died in an accident. Jeanie worked, at Buttreys, at the courtesy booth leading her to find her career path in Banking. With her knowledge she became a long time employee at Idaho Central Credit Union working there until she retired.

March of 1976 she married Donald Hodge. They spent 43 years together having many wonderful adventures, building a new house, camping, visiting with friends and family. Spending time in Mackay at her family campground by the river was one of Jeanie’s favorite past times. With the help of her sister, Vonda, she kept the grounds in a park like condition with manicured yard, flowers, and trees, making it a family gathering place for all to enjoy. Later in life she and Don spent their winters in Arizona riding ATVs, collecting desert rocks, plants, and watching beautiful sunsets.

Funeral Services will be held Saturday December 28, 2019 at 11:00 am at Anderson Funeral Home in Arco, Idaho.