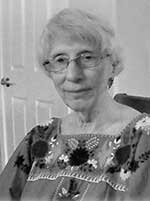 She was born on January 16, 1929, in Moore, Idaho to loving parents, Ross Osborn and Bertha Artelle Nobel Babcock. Agnes was raised and received her education in the Lost River Valley where she graduated from Arco High School in 1946. She furthered her education by attending Ricks College in Rexburg, Idaho, and received an Associate's Degree in Business Education in 1948.

On September 16, 1960, she married Howard Robert Cuyler Jr. in Idaho Falls, Idaho. They made their home in various cities in Southern California and Utah. Sometime following her beloved Howard's passing, Agnes moved back to the Lost River Valley to be close to her brothers and sisters.

Agnes worked hard her entire life to be a diligent homemaker and spent numerous years working as a secretary. She enjoyed playing the piano, organ, tatting, calligraphy, hiking, and traveling. She was a member of the Church of Jesus Christ of Latter-Day Saints.

She is survived by her children, Alison Hutt and Ross Cuyler, and their families; her grandchildren, Emily Prieto and her family, and Benjamin Cuyler and his family. She was preceded in death by her husband of 48 years, Howard Cuyler.

Funeral Services will be held Friday, June 24, 2022, at 11:00 a.m. at the Church of Jesus Christ of Latter-Day Saints Moore Stake Center. A viewing will be held for one hour prior to the service at the church. Interment will be in the Victor Valley Cemetery in Victorville, California. Services are under the care of the Anderson Family Funeral Home.