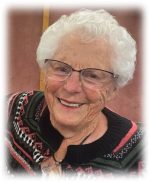 In the early morning of December 8, 2022, Afton Louise Burton Amy passed away peacefully at the age of
86.
Afton Louise Burton was born in Arco, ID on September 23, 1936, to parents Clyde and Lola Burton. Afton’s only sibling, younger brother Larry, died shortly after birth. Growing up, Afton was very close to her grandparents John and Minni Burton with whom they shared a home. As an only child, she often enlisted her pets as friends, dressing up her dogs and cats as playmates.
Afton attended grade school in Patterson, Berenice, and Howe ID. It was while attending boarding school at Patterson that she was introduced to, and developed her lifelong hatred of, hot cereal.
It was during High School at Butte County that Afton met her lifelong companion, Jake Amy. Jake and Afton were married on June 30th, 1953, in St. Anthony ID at the home of her Grandpa Jessie Lyons.
Jake and Afton’s adventures together included a move as newlyweds to Wisdom, MT where Jake worked for the Forest Service and Afton cleaned rooms for a local motel. Their family began to expand with the arrival of their oldest son Delwin in June 1956, a set of twin boys (deceased) in 1957, and son Calvin in August 1958. By this time the growing family had relocated to Cobalt, ID. By 1959 Afton and Jake began their ranching life in Clyde, ID, and were joined by daughter Juanita in May 1960 and youngest daughter Loretta in December 1968. Afton’s life was filled with raising children and animals of every variety. Afton loved to bake and was known for having a homemade treat (donuts!) and a cup of coffee
if you stopped to visit. She was renowned for her work ethic, hand milking 15 cows at one point, and her gentle nature.
Her social life was no less busy with cowbells, square dancing, pinochle parties, PTA, working election days, and Little Lost River Bible Church service.
Jake’s passing in August 2021 left an unfillable hole in Afton’s heart that was never quite repaired. She enjoyed pampering unknown to her before while living with her son Calvin and daughter-in-law Dixie Amy after Jake’s passing.
Afton will be greatly missed by her four children, their spouses, twelve grandchildren, and twenty-seven great-grandchildren (and counting), and her beautiful network of extended family and friends.
Funeral services will be held on December 17th at 11:00 AM at the Howe Community Center, a viewing will be held Friday evening from 5 to 7 PM, at the Anderson Family Funeral Home, and at 10 AM prior to the service on Saturday.  Internment following Howe, ID cemetery.

Funeral services will be held on December 17th at 11:00 AM at the Howe Community Center, a viewing will be held Friday evening from 5 to 7 PM, at the Anderson Family Funeral Home, and at 10 AM prior to the service on Saturday.  Internment following Howe, ID cemetery.